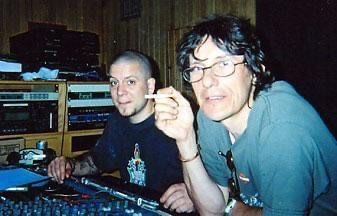 This project found it's way to the UK where the tracks were carefully processed, mixed and mastered with the seamless teamwork of Bartrum (Tremella Productions) & Gwyn Mathias (GBdB Studio)

Gwyn and Bart came together as a cross-genre production team in 1999 and despite coming from diverse musical backgrounds, they have enjoyed working together for over 20 years.  They have recorded and mixed projects from AOR rock, via sophisticated modern pop, to Americana.

"I've been doing this for years, and realize its the only thing that brings me peace and joy!"

Tony has had a long career as a collaborator and is as comfortable playing country as he is playing blues or rock or an Irish jig. He plays keyboards in a variety of bands and genres and has been a key contributor to Nancy Lee's music since 2008. His influence can be heard throughout her debut album Catch You On The Other Side...  and he continues to be a key collaborator both in the studio and at live performances.

Mr.G has had a long and devoted career in music.  After decades of dedication to playing saxophone in a variety of bands and genres, he decided to pick up the bass and has been a devoted collaborator in the Montreal and Chateauguay Valley music scene as a premiere bassman ever since.  From jazz to blues to folk to funk Mr. G knows... "It's all about the bass... about the bass..." and his skill and versatility as a musician are featured on all 12 tracks of  Catch You On The Other Side

Donny Brisebois is a blues guitarist from Kahnawake who began his career with the emerging Montreal punk scene in the 1980s.  He is best known for his charistmatic live performances as lead guitarist for the popular Montreal blues band Blind Lemon Pie. His signature style is featured on Nancy Lee's debut album Catch You On The Other Side.

John McColgan is a professional drummer, producer and educator based out of Montreal, Quebec. He has been a part of the national and international music scene for over 40 years. He owns JMC Studio in Montreal where he continues to be in demand as a drummer, engineer and producer. He is also the author of Groove, Technique & Musical Drumming.

John McColgan lends his versatility and signature style  to Nancy Lee's debut album Catch You On The Other Side.

Ray Legere, is a well known premiere musician (Fiddle, Guitar, Mandolin) who learned his craft from the masters in Nashville and other places in the southern United States before returning home to make his living as a touring and recording artist based out of Sackville, NB.

Ray Legere brings his signature style to the tracks  Partie Comme Par Le Vent  and  Nothing But A Lie from Nancy Lee's debut album Catch You On The Other Side.

“Anh Phung is a shining example of the modern musician: ...Not bothered by the conventions and standard limitations of the flute, her powerful musical voice steers her through everything from hip-hop to bluegrass to Bulgarian folk music." -Alan Mackie

She brings her versatility and signature style to the track Dancing On Top Of The World from Nancy Lee's debut album Catch You On The Other Side.

BJ Cole is an English pedal steel guitarist, who has long been active as a session and solo musician. Coming to prominence in the early 1970s with the band Cochise, Cole has played in many styles, ranging from mainstream pop and rock to jazz and eclectic experimental music, but has never forgotten the instrument's roots in country music. Through his varied and extensive session work and long career as a performer, he has come to be regarded as Britain's pre-eminent pedal steel guitarist. Cole also plays lap steel and dobro.

BJ Cole brings his signature style to the track Nothing But A Lie from Nancy Lee's debut album Catch You On The Other Side.

Born in Timmins, Ontario and raised in Montréal, Nicole studied singing with Pierre Turcotte and was a member of various choirs and quartets before discovering her passion for creative collaboration and vocal arrangement with the original music of her creative partner John Speed. They continue to create new and inspiring music from their home and studio in the Canadian country-side near St-Anicet, Québec.

Nicole blends her rich warm harmonies and vocal stylings on the tracks  My Little Angel  and Partie Comme Par Le Vent from Nancy Lee's debut album Catch You On The Other Side.

Stuart MacKenzie is a native born singer/songwriter and guitarist (acoustic, electric and lap-slide).  He began his career in the mid 1980’s with Three O’clock Train (Pipeline records)  and worked with Jerry Jerry and the Sons of Rhythm Orchestra. He also recorded music for the soundtrack Train of Dreams (Justin Time Records) by famed director Jon Smith.  He continues to collaborate on various creative projects with other artists as well as working on a new collection of original songs from his home base in Montreal, Quebec.